FORT MYERS, Fla. (Dec. 11, 2017) – Most professionals are planning their retirement after 40 years of working in the same industry. But Paul Peden, owner and founder of the Veranda restaurant in downtown Fort Myers says he has no plans to slow down or walk away from his cherished dining icon. 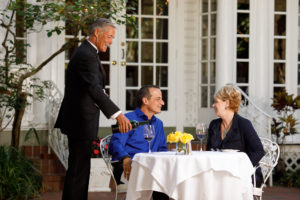 In 2018, the Veranda will celebrate 40 years of operation. Peden, who bought the two three-story, turn-of-the-century Victorian homes in 1978 and transformed them into the Veranda, has always maintained that there is no finish line for the restaurant. He says constant hard work, attention to detail and a consistent level of quality and service is what has kept his restaurant successful for the past four decades.

“We still work hard every day to improve our food and service; we are never satisfied,” said Peden who has operated nearly 30 restaurants in his career. “We are constantly evolving to meet the changing tastes of our patrons. From the front of the house to the back of house, everyone works very hard to make it a great experience for our guests every time they dine with us, and I think it shows. It takes a skilled, caring staff honed to the needs of our patrons to keep them coming back.”

Yet surviving for 40 years in a $799 billion industry where most restaurants fail within their first years is to be celebrated.

Fort Myers resident Brad Miller and his high school sweetheart and wife of 34 years Crystal have grown up with the Veranda.

“We first came here for dinner before high school dances and years later our engagement party was held here,” he said.

Brad began working at the Veranda in 1979, just a year after it opened. He left the restaurant business three years later to start Interior Plant Scapes and today his company provides interior plants for the Veranda. In his 2014 book, Victory Goes to the Business with Superior Systems: How to Transform Your Business and Your Life Through Systems, he includes a chapter on some of the winning systems he learned while employed as a waiter at the Veranda.

“I think what’s always helped is that the Veranda’s owner Paul Peden understands that his patrons appreciate the consistency the restaurant delivers through its systems and processes” Miller said. “The Veranda’s recipes are a documented process and have continued to deliver the same consistent result again and again, even 40 years later.”

Miller remembers the intricacies of having to learn how to make the Veranda’s Caesar salad.

“The general manager was a stickler and before you were allowed to serve the tableside Caesar salad you had to prepare it in front of him while he watched and then he would taste it.”

The story of the Veranda is ingrained in the City of Fort Myers’ own history. In the early 1850s, a fort on the Caloosahatchee River was reactivated and named for Colonel Abraham Myers. The fort contained 57 buildings, a hospital, lawns and gardens. A trading post pioneer by the name of Manuel Gonzalez delivered supplies and mail to the fort in his riverboat. After Seminole Chief Billy Bowlegs surrendered in 1858, the fort was abandoned until 1863 when a small number of Federal troops re-occupied the fort during the Civil War. After the war, the fort was again deserted. In 1866, Captain Gonzalez returned to the fort with his five-year-old son Manuel to become the first known residents of Fort Myers. For years, the Gonzalez family would operate a trading post on the site of the present Federal Building.

In 1902, young Manuel Gonzales built two houses at the corner of Second Street and Broadway. He and his family occupied the corner house, while the second home was built for his mother and was located adjacent to the first house (in what is now the Veranda’s parking lot).

In the early 1970s, Peter Pulitzer, son of the publisher, joined the two houses for his long-time fishing buddy, Fingers O’Bannon.

The original kitchen building from the second house, along with a secluded landscaped garden courtyard featuring a waterfall and Koi pond, now joins the two houses.

Dr. Paul Rosete and his wife Randi have been coming to the Veranda on an almost weekly basis for 27 years. The North Fort Myers couple say they enjoy Thursday and Saturday evenings, especially listening to the live music in the piano lounge.

“The Chateaubriand is our favorite meal,” Randi said. “Of course the lamb is excellent and Paul likes to the get the filet Pittsburg style, charred on the outside and rare in the center.”

Publisher David Atkinson enjoys stopping into the Veranda for lunch when he often travels to Fort Myers for business.

“It’s convenient and it’s a great place for easy conversation,” he said. “When I want to impress a client, they never turn down a chance to go to the Veranda.”

Atkinson, who owns AMM Publications, publisher of Southwest Florida’s Destination Magazine, said he also likes to entertain friends and clients for dinner.
“The bar is very enjoyable; they have a fantastic piano player and meeting friends for a drink there first is a perfect way to start a great evening.”

The Veranda’s interior is best described as an elegant Southern Victorian house. The low-lit, spacious, mahogany piano bar just inside the front door beckons patrons to have a seat at one of the high back cushioned chairs, order a drink, enjoy an appetizer and live music, relax and take in the vintage photos which line the walls. Along with the fully stocked bar, the Veranda also boasts a large selection of vintage wines.

Through the years, the ownership has meticulously maintained the home’s interior and exterior to preserve the restaurant’s authentic charm. Carpeting is regularly replaced; walls are repainted or re-wallpapered, drapes are redone and the signature high backed, padded dining chairs are re-cushioned with new fabric.

“The remodeling never stops,” said Peden. “Our patrons might not notice the changes because they are subtle and meant to maintain the restaurant’s same comfortable feel and charm.”

“We started coming to the Veranda when we were first dating in 2005,” said Jacquie and Doug Flenniken of Cape Coral.

The couple were married a year later and have enjoyed dinner and drinks at the Veranda every other week as well as numerous New Year’s Eve celebrations.

“We tell our friends, you don’t need a special occasion to go to the Veranda, you just need to go.”

In the last decade, lighter menu items and gluten-free selections have been added to accommodate special diets.

“Our success can be attributed to the amount of experience our staff has. Our team has been doing this for a long time and they really know the business of taking care of people,” said General Manager Dennis Genge who has been with the Veranda since 2000.

“It’s truly a unique dining experience you can’t get anywhere else, whether it’s an afternoon luncheon or romantic dinner under the stars,” said Peden. “The Veranda continues to be my passion. We work together each day to not only make sure we are meeting our patrons’ needs and expectations but also to make sure we have our plan for the next decade of the Veranda’s success.”

The Veranda is located at 2122 Second Street in two turn-of-the-century Victorian homes. The restaurant features Southern regional cuisine with a full bar, extensive wine list and first-class service in a romantic setting. The Veranda is consistently honored as one of the most award-winning restaurants in the area.